Deputy Head of Section (Legal) at the Defence Policy Department, Ministry of Defence, Republic of Armenia 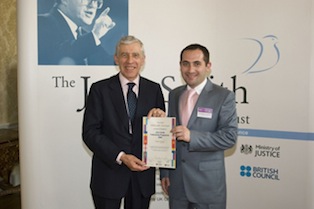 Aleksandr is Deputy Head of Section within the Defence Policy Department of the Ministry of Defence (Republic of Armenia). He holds the rank of Captain of the Armenia Armеd Forces.

At the time of the 2008 Fellowship Programme, Aleksander was an Adviser on Military and Military Servicemen Issues to the Human Rights Defender of Armenia. The Human Rights Defender is an independent and autonomous public official who implements the rules and procedures for the protection of human rights and fundamental freedoms which are being, or have been, violated by the state and local governmental bodies, as well as their officials, elected or otherwise. In support of the Defender’s activities, Alik provided the Defender with the necessary legal advice on military issues. He played a practical role in considering (through the Staff or directly) the claims of violations of human rights and fundamental freedoms by the state and local governmental bodies and officials concerning military issues.

During 2009 – 2010 Aleksandr read Security Studies (MA) at the Fletcher School of Law and Diplomacy of Tufts University (Boston, USA).