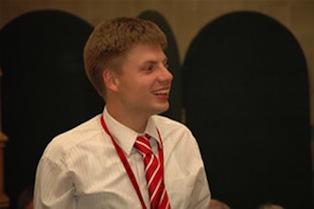 By decree of the President of Ukraine, Alex has been appointed as a Member of Ukrainian delegation to the Congress of the Local and Regional Authorities of the Council of Europe. In November 2010, he was elected as an Odessa Regional Councillor and was subsequently elected as Vice-Chairman of the Council.

At the time of the 2006 Fellowship Programme, Alex was Head of the youth organisation ‘Zelenka’, an NGO campaigning for environmental reform. In 2006 he was elected as an Odessa City Councillor and in 2007-2008 served as the Head of Committee on Improvement of Municipal Management. He graduated from the Odessa State Medical University as a doctor, and also from the Academy of National Economics at Government of the Russian Federation, Moscow with a master’s degree in finance.