Deputy Minister of Justice for Armenia 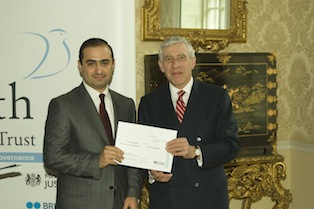 Artyom Geghamyan is Deputy Minister of Justice for Armenia. He was appointed to this position in June 2014. Before that he was working as a Research fellow at the Carr Center for Human Rights Policy, Harvard Kennedy School of Government.

As a Deputy Minister for Justice he is responsible for the Ministry’s policies in the following areas:

Artyom was previously based in Strasbourg as Head of the Department for Relations with the European Court of Human Rights at the Ministry of Justice of the Republic of Armenia. The Department is responsible for developing the Government’s official position and assisting the Government Agent in representing Armenia before the European Court. It also supervises the implementation by domestic authorities of the Court’s judgments and provides recommendations to public authorities on improving administrative and law-enforcement practices. The Department deals with a wide range of human rights issues, particularly handling applications and claims concerning human rights violations.