Deputy at the Supreme Certifying Commission of Armenia 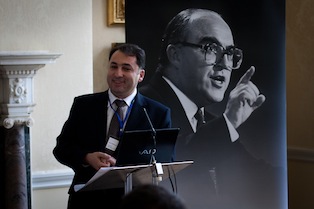 Atom Mkhitaryan is a Deputy at Supreme Certifying Commission of Armenia. The body responsible for awarding scientific degrees and ranks in Armenia. At the time of his Fellowship in 2012 Atom was Head of Pan-Armenian programs´ department at the Ministry of Diaspora. As head of a government department Atom worked on drafting and  implementing government programs in the areas of ´Science and Education, Culture, Sports and Youth´. He also is the president of the biggest Armenian youth organization – The Federation of Youth Clubs of Armenia (FYCA), and also is a lecturer at the National Academy of Sciences of Armenia, supervising 30 MA students on the theme of Electoral rights and electoral systems.

In the summer of 2013, Atom launched his action plan through the FYCA ‘Let’s Try’, this is a residential programme where 50 young people from Armenia, Azerbaijan and Georgia came together in Kobuleti, Georgia to develop youth dialogue. In 2014, several participants from the “Let’s Try” camp visited Armenia for various other regional and international youth projects and the Council of Europe used the “Let’s Try” project as an example of a successful peace building initiative in their “No hate speech movement”.