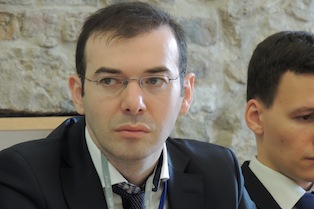 David Jandieri is an Official Representative of the coalition ‘Georgian Dream-Democratic Georgia’ in the Central Elections Commission of Georgia. He is also a trained lawyer specialising in human rights. In 2011 he won the landmark criminal law case (Enukidze and Girgvliani v. Georgia) which proved the Ministry of Interior’s shortcomings and perversion of justice in a homicide case – this has become the most famous criminal case in Georgian history. Until early 2014 he was the First Deputy Minister of Justice of Georgia. David has a Masters’ degree in European Human Rights Law from the University of Strasbourg and has also trained at the European Court of Human Rights.

David’s action plan will aim to promote the rule of law by addressing the implementation of the Criminal Justice System reform in Georgia. At present there is no institution or organ that can exercise external control over the judiciary and that can be help politically responsible  for misconducts of prosecutors. There is also lack of effective remedies to combat erroneous judgments where appropriate evidence has existed or, despite of lack of evidence, judgments are distorted. David plans therefore to implement the instauration of control over the Prosecution Service (PS), a mechanism for ensuring political responsibility/accountability over the Prosecution Service and the instauration of impartial system of review of Justice in error.