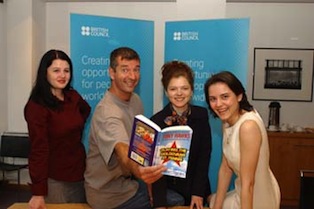 Doina is based in Geneva, Switzerland, and works in the Credit and Capital Advisory Department of JP Morgan (Suisse).  Prior to that she was a Credit Risk Manager in the London based International Banking Department of Sumitomo Mitsui Banking Corporation Europe, one of the largest Japanese banks, where she was responsible for credit and sovereign risk related to financial institutions in the CIS and Southern Europe. Before joining SMBC, Doina was a Senior Analyst at the European Bank for Reconstruction (EBRD). The EBRD is one of the major international financial institutions and uses the tools of investment to help build market economies and democracies in countries from central Europe to central Asia and is the largest single investor in the region.

Doina holds a B.A. in International Trade Relations, French and English from Babes Bolyai University (Cluj-Napoca, Romania); an M.A. from Moldova State University (Chisinau, Moldova); and an M.A. from the University of Manchester (Manchester, UK). Doina took part in the John Smith Fellowship Programme in 2002. At that time, she worked for the Soros Foundation of Moldova as Rural Economic Development Programme Co-ordinator. Whilst based in London, Doina assisted the John Smith Trust during their 2009 Fellowship Programme – organising social activities for Fellows and helping in the office.