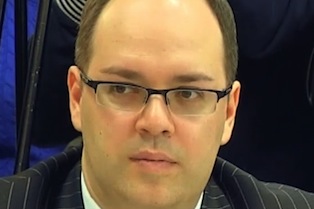 Evgeny is Adviser to the Rector and Senior Lecturer of the Minin University (Nizhny Novgorod). He also offers business trainings and consultancy to various Russian and international companies.

Between 2003 – 2014 he was the Russia Community Relations Manager for Intel Corporation where he fostered national and local government relations, managed education and other charity projects, and liaised with the media about Intel’s work. In 2008 he was listed in the ‘Top 1000 Most Professional Managers’ and ‘Top 100 Most Professional PR Directors’ in Russia. The ratings are developed by the Russia Managers’ Association and Kommersant Daily. In 2015 he was awarded with a PhD in Philosophy.

In 1993 he was appointed Assistant to Speaker of the Nizhny Novgorod Legislative Assembly – the position he held at the time of the 2001 Fellowship Programme. From 1997-1998 he worked at the German Bundestag (Parliament) President’s Office. In 2002 Evgeny became Deputy Chief of Staff for the Government of the Nizhny Novgorod Region in the rank of the Deputy Minister.