Political Officer for the European Union Delegation to Georgia 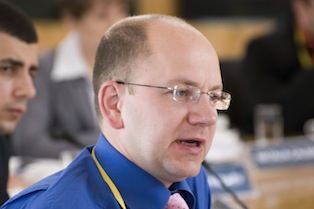 Giorgi holds the post of Political Officer to the European Union Delegation to Georgia. The European Union, via the Partnership and Cooperation Agreement (PCA) and the Eastern Partnership, provides wide-ranging support to Georgia particularly focusing on political and socio-economic reforms. Giorgi provides advice on Georgia’s domestic and regional politics to the EU Delegation and to European Commission officials in Brussels.

Giorgi began his career as a journalist at the Georgian parliamentary newspaper, followed by a role as Press Officer to the President of Georgia. He has experience working for several international and national organizations including: Media Analyst to the United Nation’s Observer Mission in Georgia, Political Analyst of the EUSR to the South Caucasus (Tbilisi Office), Assistant to the Head of Mission of the EU Rule of Law Mission to Georgia, Information Officer for the International Committee of the Red Cross, and Chief Press Protocol Officer at the Georgian Gas International Corporation.

Giorgi is interested in learning about the cooperation and liaison between the main UK political parties at national and local levels. He is keen to explore the relationship between the ruling and opposition party, particularly during the law-making process. He is also interested in public broadcasting accountability and transparency of media ownership.

He is a PhD candidate (Conflict Analyses) at Tbilisi State University.