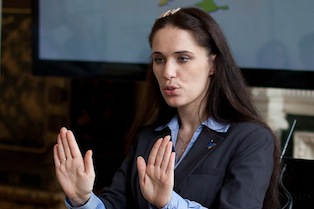 Hanna Shelest is a is a freelance consultant on International Affairs in Ukraine. She is currently working with the MFA on a study of Ukrainian-Middle East policy. She previously worked as a Senior Researcher at the National Institute for Strategic Studies under the President of Ukraine, Odessa Branch, focussing on security and conflict studies in the Black sea and Middle East regions. She is a recognized expert in this sphere and widely published in different countries. She was recognised for her work on peace and conflict resolution in 2010 when she became the first person to be selected for the Rotary Peace Fellowship from a Post-Soviet country. In 2010 Hanna was also nominated as a Black Sea Young Reformer.

Hanna has also worked as a media consultant to the Governor´s office, as a university lecturer and lobbyist. In addition, as a student she started the first In-Ukraine Model United Nations, Odessa National University Model United Nations. She has since been involved with getting young people involved in politics, organising different programs and conferences for them.