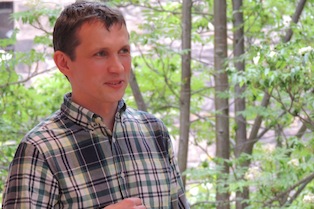 Maksym Savanevskyi is Editor-in-chief of Watcher (watcher.com.ua), an online news platform that explores and analyses the impact of digital communications on society in Ukraine.  He is also the founder and Managing Partner of one of the largest digital communications agencies in Ukraine, PlusOne DA. Through these organisations Maksym has consulted and advised a number of Ukrainian NGOs and political parties on how to maximise their use of new media – focussing on how to actively interact with supporters via social media. His work has recently included an extensive research study into social media and its impact on the protest movement in Ukraine, with particular emphasis on the role social of media in the creation and continuity of the Euromaidan movement. In 2004 Maksym was one of the initiators behind the ‘Orange Ribbon’ which became a symbol of the Orange Revolution.

Maksym believes that while social media has played a key role in building Euromaidan – giving a voice to Ukrainian civil society – it has not yet been able to act as an effective platform for dialogue between political parties, NGOs, independent movements and citizens in Ukraine. As a John Smith Fellow he hopes to explore how digital communications may be used as a tool for dialogue and to encourage better interaction between these groups during the post-crisis reconciliation process.