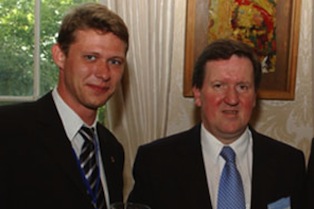 Other positions he has held include: Secretary of the Political Council of the Peoples´ Movement “Third Republic” (Labour movement); President of the All-Ukrainian NGO “Ukrainian Falcons” (Member of the Socialist Educational International), President of P.A.C.E. (Participation and Active Citizenship in Europe), Leader of the Left Youth Forum in the Youth Forum of Ukraine, and Director of the Political Analyst Centre “STRATAHEMA” and web newspaper “POLITHE”.

At the time of the 2004 JS Fellowship Programme, he was Parliamentary Assistant to a Ukrainian MP of the Socialist Party of Ukraine, and Vice President of the Union of Young Socialists of Ukraine.