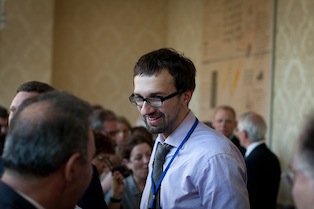 Sergii Leshchenko is an Investigative Journalist for Ukrainska Pravda. Sergii started writing for Ukrainska Pravda whilst at university in 2000. Sergii is now renowned for taking on corruption at all levels of government in his work. The results of his investigations have appeared in news sources throughout Europe and the US. This has been recognised in recent years with a series of awards. He recently won Poland´s Foundation of Reporters Award in 2011 for being the best journalist within the countries of the Eastern Partnership (Ukraine, Belarus, Moldova, Georgia, Armenia, and Azerbaijan).

Sergii believes that Ukraine is undergoing a backwards slide into greater censorship and a weakening of freedom of speech. Whilst many major news sources are owned by those he believes are unwilling to fight censorship, new media forms, such as the online newspaper for which Leshchenko writes, are effective tools for disclosing information important to the public. To capitalise on this Sergii wants to intensify the use of these new media by the Ukrainian public. He hopes that by training Ukrainians to effectively use new media forms it will allow important information to circumvent traditional news sources that are unwilling to publish this information.