Member of the National Assembly of the Republic of Armenia 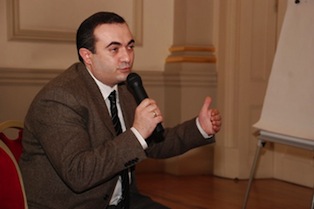 Edmon is a Member of the National Assembly of the Republic of Armenia.

He was elected in May 2012 as an independent, non-partisan candidate. He sits on the standing committees for State and Legal Affairs; Protection of Human Rights and Public Affairs; and Foreign Relations. In December 2012 Armenian Magazine “De Facto” named Edmon ´MP of the Year´. He is also currently the Chairman of the Center for Strategic Litigations (a Human Rights NGO in Armenia). Prior to his political career Edmon worked as a lawyer, focusing in particular on human rights. In 2008, he passed the Bar exam and joined the Chamber of Advocates of Armenia. Since then he has initiated and conducted a number of strategic litigations, establishing valuable court practice for the protection of human rights in Armenia. Edmon was also a Consultant for the Europe and Central Asia Division of Human Rights Watch and from 2005 to 2012 he acted as an observer to the Public Monitoring Group, observing the rights of prisoners in Armenia.