President of the Media Group 'All of Kirovohrad' 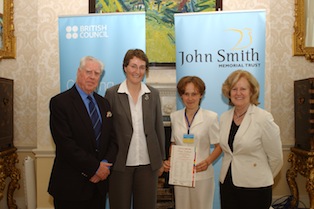 Viktoriya is President of the Media Group “All of Kirovohrad”. Her team produces a weekly newspaper called ‘NewLook’ dedicated to social and political issues in the region, as well as monthly glossy magazine “Lanrug”. Vika coordinates the editing of several informational websites and organizes weekly meetings of local journalists with NGO leaders and politicians at the ‘Kirovohrad Reform Press Club’.

Viktoriya is also Head of a regional youth organization called ‘League of intellectual development’, and is Secretary of the Public council in the regional state administration. At the time of the 2004 JS Fellowship Programme she was a journalist for a Kirovohrad regional newspaper ‘Our Newspaper’.