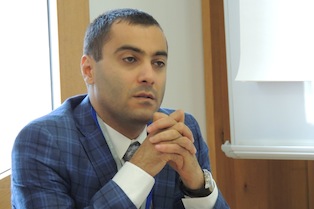 Dr Vrezh Kardumyan works as a Diplomat and Chief Specialist to the Office of the President of the Republic of Armenia where he is involved in the coordination of bilateral and multilateral military, political and economic relations with the Commonwealth of Independent States and other European countries. Previously he has worked at the Ministry of Diaspora where he was involved in developing ties with communities living abroad and focussing on integration within their countries of residence. Vrezh is also an Associate Professor in International Relations at both the Yerevan State University and Russian-Armenian University.

Vrezh’s action plan is to promote greater transparency and efficiency in the foreign policy making process in the Republic of Armenia. There is currently a low level involvement of civil society in foreign policy decision-making and low levels of cooperation between civil society and government in foreign policy development. Vrezh therefore wants to look closely at  UK and US experiences of cooperation between think tanks and the government to prepare policy paper on greater collaboration and submit it to the Head of the Presidential Administration. He then hopes to organise regular consultations between the government and think tanks whilst introducing his research on the UK/US models to the International Relations curriculum at Yerevan State University. Eventually, Vrezh would like to establish an Armenian Council of Foreign Affairs.