Head of International Relations and Protocol at Sevastopol City Administration 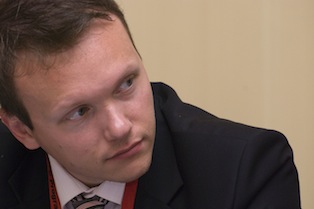 Yevgen is Head of the International Relations and Protocol Department at the Sevastopol City State Administration. Sevastopol is a port city in Ukraine located on the Black Sea coast of the Crimea peninsula.

The International Relations and Protocol Department is responsible for all communication with representatives from abroad. In particular, the Department deals with protocol issues, planning and management of international events, and managing cooperation with foreign agencies, embassies and organizations. In addition, the Department is responsible for all actions in the context of existing Ukraine-EU and Ukraine-NATO action plans.

Yevgen’s role as Head of the Department can be divided into two areas – protocol issues, and European and Euro-Atlantic integration.

The protocol aspect of Yevgen’s role includes the organization and coordination of incoming visits of high state officials and diplomatic and foreign delegations to Sevastopol; the organization of outgoing foreign visits of delegations of Sevastopol officials; interaction with foreign embassies in Ukraine and the Ministry of Foreign Affairs of Ukraine; consular issues; establishment and maintenance of contacts with foreign counterparts; event planning and management of international assemblies, seminars, workshops, news conferences etc.

The other aspects of Yevgen’s work involves the coordination of the implementation of the Ukraine-EU and Ukraine-NATO action plans in Sevastopol. This includes monitoring of the implementation, preparation of annual reports and policy recommendations, organization of conferences, seminars, workshops on European and Euro-Atlantic integration, and consultations on projects in the context of the EU Black Sea programme, Black Sea Synergy, Eastern Partnership, and Joint Cooperation Initiative in Crimea.