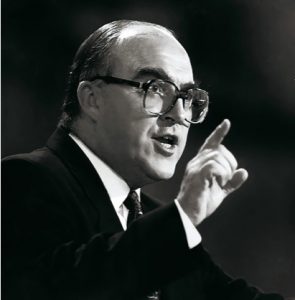 The John Smith Trust is a living memorial to Rt Hon John Smith QC MP, one of the outstanding political leaders of his generation.

John Smith was born in Argyll, Scotland and came from a modest background. He transformed the politics of his time thanks to his intellect, debating skills and capacity for achieving practical compromise. He was leader of the UK Labour Party when it was struggling to recover from ideological divisions that had contributed to four consecutive electoral defeats. Having helped to shepherd the party out of this crisis, John Smith was widely expected to become the next Prime Minister of the United Kingdom. He died tragically in May 1994, age 55, deeply mourned by the British public and all who knew him.

‘The opportunity to serve our country – that is all we ask’

The John Smith Trust was created in his memory to continue his mission and foster the values he treasured and embodied: good governance, the rule of law and social justice. The Trust’s Fellowship Programmes – and indeed its Fellows – are a celebration of those values.

Who was John Smith?
Interview with Lord Boateng