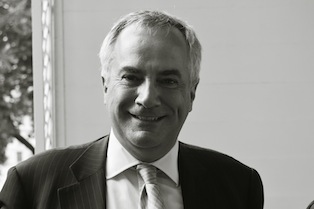 David Charters has an extensive track record of achievement in financial services – over 20 years as a Director of SG Warburg Securities, Managing Director at Deutsche Bank and then as an independent practitioner.

He entered The City in 1988 after five years in the UK Foreign Office which he joined from Cambridge University.

David was head of equity syndicate at both Warburg and then Deutsche in London and was responsible for global equity new issue operations. He worked on many of the largest and most innovative flotations and privatisations, for companies as diverse as Eurotunnel, Repsol, Euro Disneyland, Deutsche Telekom, amazon.com, e*trade and EADS.

He was responsible at both banks for building and developing substantial global businesses operating from multiple local hubs. At Deutsche he co-headed the bank’s Technology Venture Capital Investment unit within Equity Capital Markets, which invested the firm’s own capital in a diverse portfolio of technology and media related businesses in the US, Europe and Israel. Following the success of this unit he retired from The City at 39 in order to pursue private investment interests.

As a private practitioner since 2000 he has invested in over twenty companies and advised a broad range of clients. He has substantial expertise in and investment returns from the software, leisure, business services and property sectors. He has had extensive involvement in developing companies at board level either as Chairman or NED. Current and recent directorships include VTB Bank Europe plc (previously the Moscow Narodny Bank), the business support services company AdviserPlus Ltd and the D Group, the UK’s leading senior executive business networking organisation.

Outside his financial sector involvements David is a published author, with two collections of short stories and four novels set in the City.  He is a co-founder of the Beacon Prize for Philanthropy, a trustee of Action for Blind People, the UK’s third largest visual impairment charity, and from 2002 – 2010 sat as a City of Westminster Magistrate.